Everyone has a dream car. Imagine you finally get it. It looks great sitting on your driveway, the sun glistening down highlighting the perfectly waxed look. It is flawless. Now you start it up, but it belches black smoke, shakes, rattles, and then conks out. Your dream car just turned into your nightmare. But it looked so nice just sitting there, didn’t it? You should have investigated what’s under the hood. 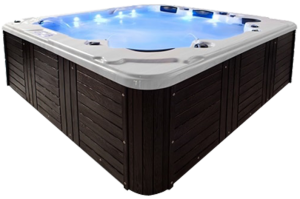 Hot tubs, commonly called spas, are a lot like cars. If they aren’t built right, it doesn’t matter how pretty they look on your deck or patio. It’s easy to take things out of sight and turn them into a “sales pitch”. However, pitches aren’t always logical when analyzed. Here is a feature that is frequently debated.

When heating water to as much as 104°, it is imperative you contain the heat as best possible. Some manufacturers fully foam the undercarriage, filling the cabinet to its maximum capacity. Everything gets encased in foam except motors, valves, and the control box. Salespeople proudly boast of maximizing insulation and saving you money. Sound’s good—yes? No. These are a technician’s worst enemy when trying to locate a leak or perform a standard service call. But the salesperson bragged about his/her tub having as much as twelve to twenty inches of foam insulation. “It’s so important.” Then they supplied a cover for the unit that is about five inches thick at the most. And it works just fine to lock in the rising heat.

Numerous manufacturers brag about using high density structural foam for extra support. I’m sorry, but I don’t want structural foam underneath supporting my unit. It can be an alternative to a fiberglass or ABS reinforced shell, but what if you have a leak? You start by picking out hunks of the foam to find, then fix the leak. But, when you are finally done, the replacement foam is usually just the spray stuff out of a can. Consequently, the shell may be compromised by losing material originally added for structural integrity. Structural foam: it’s their term, not mine.

Of course, there is the opposite scenario of not enough foam. Economy manufactures tend to put just a small layer of foam on the undercarriage. There is a definite heat loss there., often accompanied by a thinner, inferior cover.

I’ve owned three hot tubs over the past 30 years. One was fully foamed with low density foam while another used structural foam. Both developed leaks that were difficult to find. Water will channel through foam until it finds a way out. That spot may be all the way on the opposite side of where the leak is. This makes it hard to find and in the service industry, time is money. Meanwhile, the pile of removed foam grows higher and higher.

My third hot tub is a Saratoga and I like what they do. Firstly, on the undercarriage they add a rigidizing bond for extra support. Secondly, they apply several inches of foam to the reinforced shell. Thirdly, foam is then added to the inside of the cabinet skirt, leaving a dead air space where heat is trapped. It is a concept similar to a double-pane glass window. You get maximum insulating effect and the added benefit of serviceability. The technician won’t have to attack the tub to fix a problem should a service need arise. The unit is strong, properly insulated, and economical to own.

Logic and fact are hard to argue against, so always ask “What’s under the hood?”